When Muli our interpreter and I approached the ward to see Tigabu Fasikaw, there were 4 beds and quite a few young men in the room. They had been sharing conversations which stopped when we entered and became interested to hear Tigabu’s story as he shared it with Muli and me. 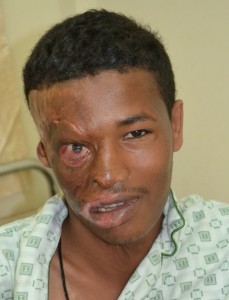 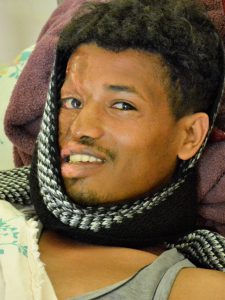 Tigabu when I spoke with him in the Gamby Hospital in 2018.

Tigabu was first seen and operated on by our surgeons in 2016 and had been asked to return and see us in 2018 when our RESTOR team would be back in Bahir Dar. There was some additional work that our surgeons felt that would be of benefit to him. Tigabu lives and works in Debra Tabor about 110 kms from Bahir Dar. He rents his own place and is “Single like a bird,” he said.

The surgery in 2016 released the tightness from the skin on his neck which was pulling his lip and right eye lid down making his eye water. The surgery has given him greater movement of his head and he said that he can now look upwards and can now close his eye almost completely. Many times in our conversation he remarked that the surgery has given him greater confidence and self esteem, especially at work. He is an accountant at a bank, which is a very good job to have in Ethiopia and his employer is appreciates of his work and new confidence with customers. 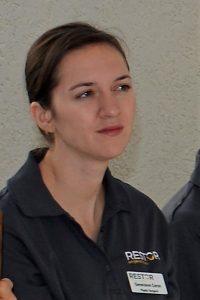 I spoke with one of our surgeons, Dr. Genevieve L. Caron who told me that they did a skin release on a corner of his mouth.

Tigabu said that he wants to be an example to others and said that what we are doing is changing lives. His he said has changed in unexpected ways, in that he wasn’t anticipating how dramatically his self esteem and confidence would improve working at the bank and with the public and thanked us very much for what we have been able to do for him.

He remembers Jeannie Bird whom he met on the 2016 mission and extends a special thank you to her for her support and encouragement.